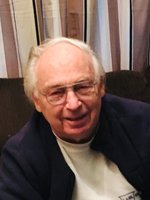 Roy passed away peacefully Dec. 12, 2019 in Portland Oregon. Roy was born on Nov. 1, 1925 in North Dakota and grew up in a large family full of laughter and love. His children and grandchildren often heard stories of growing up on the farm and the escapades they would have. Roy passed on his joy in life to others and could often be heard laughing, telling stories, and sharing a joke with those around him. Roy met the love of his life, Alverta Hager, while working on her family’s farm. He served in the army in WW2 and was stationed in the Philippines. Roy and Alverta married in 1951. They moved to Portland Oregon in 1952 so Roy could attend college. He graduated in 1960 while working at the Post Office to support his growing family. Roy was ordained as a minister in 1968 and faithfully served for over 40 years. Roy and Alverta loved to travel and spend time with family. This was something he continued to do even in his 90’s. Roy was preceded in death by his wife Alverta in 2004, and is survived by his 5 children, 20 grandchildren, 18 great grandchildren, and 1 great-great grandchild. Burial with military honors will be at Willamette National Cemetery on Dec. 30, 2019. Viewing provided at Wilhelm’s Portland Memorial at 6705 SE 14th Avenue on Dec. 27, 10:00 – 4:00pm. A Celebration of His Life will be held on Saturday January 18, 2020 at 2:00pm at Lynchwood Church of God, 3818 SE 174th Avenue.