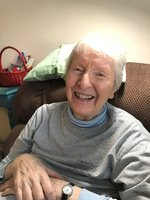 February 16, 1934 - November 25, 2019 Esther Rand passed away on November 25, 2019 at Pacifica Senior Living in Portland, Oregon, where she had resided for the last five months. Esther was the youngest of four children born to R. Floyd (Slim) and Grace Henderson. She was born in Hebron, Nebraska and was raised mostly in the surrounding area. She graduated from high school in Sabetha, Kansas. After high school, she attended college and training at the old Bethany Hospital in Kansas City. Upon graduating and receiving her nursing degree, she accepted a job in Portland, Oregon. She held various nursing positions and particularly enjoyed traveling with the Red Cross on the blood mobile. She loved the Portland area and has resided in the area for the past sixty plus years. Esther was preceded in death by her spouse David Rand, her parents R. Floyd and Grace Henderson, her brother, Robert Henderson and sisters, Barbara Francek and Theda Skillin. She is survived by several nieces and nephews. A huge thanks to all of the staff and caregivers at Pacifica Senior Living and Elder Place who made Esther’s final journey a pleasant one, also to Margaret, her assistant and shopper. In honoring her wishes, there will be no formal funeral service. She has requested cremation and her ashes spread upon Mt. Hood. Donations in her name may be made to: OHSU Foundation 1121 Salmon St #110 Portland OR 97205 Make checks payable to: OHSU Foundation and indicate OHSU Brain Institute