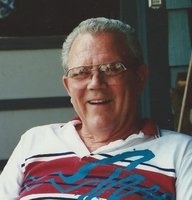 David passed away in his home on January 19, 2020 under the care of hospice with his family at his side. David Edward Voll was born in Portland, Oregon to parents Samuel True and Verda Ruth (Foster) Voll on July 11, 1939. David was an older brother to siblings Kathy and Stan Voll. David attended and graduated from Cleveland High School in Portland OR in 1957. In 2009, David was inducted into the Cleveland Athletic Hall of Fame. He attended Portland State College in Portland OR and he graduated in 1966. He met Martina Manz when they both were Cleveland High School seniors. The two were wed on August 29th, 1959 in Portland. They were blessed with two children: daughter Karen and son John. When David and Martina were first married, he worked for Continental Baking/Hostess. A few years after graduating from college he started working for Hyland/Baxter until his retirement. David was a proud member of the Commerce/Cleveland Alumni Association: He served over 15 years on the Board of the school’s Alumni Association, including a two-year term as President. He was instrumental in propagation of news from Cleveland being sent to alumni via the Alumni newspaper for at least six years. He enjoyed boating, golf, coaching and guiding his grandchildren, photography, traveling, watching sports, camping & fishing. He was also a history & sports trivia buff, and a stamp collector. If David was asked about his fondest memories, he would certainly mention many travels with Martina, family, and friends. Another fond recollection would be his time devoted to coaching and watching his grandchildren and great grandchildren play sports. David will be remembered as someone who lived by the code of “Family First, Always.” David is predeceased by his parents Samuel Voll & Verda Foster Voll; and sister Kathy Voll Crist. He is survived by his loving wife of 60 years, Martina Voll; daughter Karen Trussell; son John Voll; grandson John Trussell; granddaughter Shauna Trussell; great-granddaughters Abby Trussell and Kaylei Trussell; and brother Stan Voll. A Memorial Service will be held at Wilhelm’s Portland Memorial, 6705 SE 14th Avenue, Portland, OR, on Sunday, February 2nd at 10:00am. Remembrances may be made in David’s Honor to CCHSAA (Commerce-Cleveland High School Alumni Association, Portland OR or the American Heart Association. Please visit the online memorial and guestbook found on this site and enter a special memory or message. Thank You. Arrangements Entrusted to Wilhelm’s Portland Memorial Funeral Directors, Portland, Oregon.