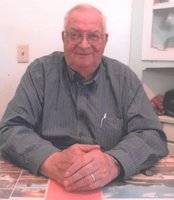 Richard D Hern, son of Halley, and Mary Hern, passed on February 18, 2020. Born June 30 1938 in Empress Alberta Canada. He lived on the family homestead until the age of seven, until the family moved to town in Empress, where he attended school. He loved to hunt, fish, play music, and fly his dad’s airplane. In 1961 he entered the US. Army serving until 1967, where he was a multi engine aircraft mechanic, and expert rifleman. He spent the better part of two years serving overseas. In 1965 he married Darlene Strom, and had two children David, and Elizabeth. After his military service he did various jobs, wheat farming, and in his later years construction management. He was a member of the American Legion. In retirement Richard enjoyed Church, friends, and functions as well as playing music. He will be greatly missed. "He Only Takes the Best" God saw he was getting tired and a cure was not to be. So he put His arms around him and whispered… “Come with me.” With tearful eyes we watched him suffer and saw him fade away. Although we loved him dearly, we could not make him stay. A Golden heart stopped beating, hard working hands put to rest; God took him from this earth to prove… He only takes the best.