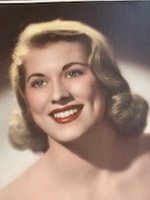 Jerry Alexander Arnold ("Alex"), 80, died Saturday, August 8th, in Wilsonville, OR, following a decline in health in recent months. Jerry was born in Memphis, TN, to the late Herman Augustus Kelly and Martha Geraldine Allen. Jerry graduated from Memphis Central High School and attended Memphis State University. She married Richard Alexander in 1961. They moved to California, later to Oregon, and divorced in 1972. Portland, Oregon remained Jerry´s home for the rest of her life. For many years in the 70s and 80s, she was a successful sales representative in the ski industry, traveling throughout the western part of the US and skiing in her favorite mountain regions. Jerry married her life-partner, Ross Arnold, in 1985 and became known among her family and friends as Alexandra "Alex" Arnold. During their 43-year marriage, Alex and Ross enjoyed traveling and sharing a particular love for India and their special friends there. Alexandra was engaged in a healthy lifestyle, enjoyed classical music, reading, and learning. She had many friends, loved to entertain, was an exceptional cook, and surrounded herself with beautiful art, flowers, and special mementos of her world travels and unique experiences. Singing was dear to her heart and Alex sang for as many years as she was able, with the Lake Grove Presbyterian Church choir. Nearly every Saturday, Alex listened to the broadcast of the Metropolitan Opera, a tradition that family members continue in her memory. Known to her two grandchildren as "Mama Zan," she adored them, and they adored her. They shared jokes, much laughter, and the occasional sip of champagne on special occasions. Alex was a strong and beautiful woman who had a great zest for life, non-judgmental ways, a wide-open spirit, and total curiosity about everything from politics to science to hummingbirds. She lived. She laughed. She loved. She added sparkle and life to every party and will be greatly missed. The family would like to share special thanks with Natalya Balanetskaya and Mike Shmulevskya, owners of “Sofia´s Home,” an adult care-home in Wilsonville that took wonderful care of Alex during her last several months of life. Mary Anne, RN, Sunny, Fini and Melanie were angels and showed empathy and respect for Alex. Mary Anne brought Alex her favorite Starbuck´s drinks, and efforts were made by the entire team to keep Alex comfortable and pain free, and as happy as possible in physically challenging times. In spite of COVID-19 limitations, caregivers were extra-accommodating and moved furniture and made special arrangements to allow Ross, family and friends to visit with Alex through her bedroom window-screen. Survivors include husband Ross; daughter Courtney Alexander (Bob) and grandchildren Charles and Samantha, of Virginia; sister Johnnie Kelly Sultanik (Aaron), of New York and nephew Jesse and niece Gabriella; brother-in-law David Kennedy of Memphis, TN, and niece Christine and nephew Kelly. Alexandra´s parents, and sister, Patricia Kennedy, predeceased her. Due to concerns over COVID-19, a Celebration of Life will be held at a later date.