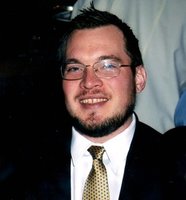 Jonathan Drew Hess passed away in Portland Oregon, on September 7, 2020, at age 39, after a long illness. He had a debilitating string of internal diseases, similar to those that killed his paternal grandfather at the age of 47. The same illnesses are being diagnosed and treated as contributing to his fathers recent stroke. Jon was born in Stanford, California, in 1980 and was raised in Los Altos, California. He graduated from Saint Francis High School in Mountain View, California in 1998, and from there went to Washington and Lee University in Lexington, Virginia. While at W&L Jon learned the “speaking tradition”, a practice Robert E. Lee put in practice to restore civility after the Civil War. That tradition remained with him the rest of his life, and he was known for his cordiality and courtesy. Seeking a broader curriculum, Jon returned to California and graduated from the University of California in 2002. He remarked that he had gone to both the most conservative and the most liberal universities in the country. Jon was well respected in both organizations. Jon loved to travel and took his first road trip across the country in 2003. Subsequently he traveled throughout Europe, Canada, and South America, and most recently took several road trips with his father through the western United States. Hawaii was a special place for him, and he learned to grill and enjoy fish, boogie board and surf, and snorkel. He also enjoyed soccer, camping, hiking, and hanging out with his numerous friends. Jon was an Eagle Scout. He was a writer. He published his first article at age 9 in a children’s magazine, and he kept a daily journal that he maintained to his death. His journals fill ten feet of shelves. He self-published a collection of his poetry. Jon spent a summer in a creative writing program at Stanford. When he registered the instructor commented on his name, asking if he was related to the John Drew Barrymore of the acting family. Drew is a maternal family name. When he left for college he decided to go by his middle name, but to his family he always wanted to be Jon. In 2008 Jon moved to Portland, Oregon to become the event manager for a well known Portland chef. He opened, and managed, Sunshine (on Division) and later managed other local restaurants including Nori Nekko (Stray Cats). He loved the world of Portland foodies, and made many friends in the business. He learned to cook from them, and enjoyed cooking for his family. Jon never stopped writing, and transitioned over the last several years to technical writing on cutting edge issues related to networks. He partnered with his father to develop reports, newsletters, and presentations on the emerging 5G networks. In September they received an unsolicited invitation to speak at the Barcelona World Mobile Conference next year, which would have been one more wonderful road trip. Jon leaves behind his parents, Joe and Virginia Hess, his grandmother, Bebe Flynn, his sister and brother in law Mary Hess Eliason and David Eliason and nephew Andrew Eliason. He also leaves his loving partner Elaine Barron. A Celebration of Life will be scheduled at a later date. A Mass was said in his memory in the chapel at Saint Francis High School, for which his family is profoundly grateful. The family is establishing a fund in his name at the Los Altos Public Library. https://sccld.org/help-the-library/donate/. Or donations to Loaves & Fishes, https://www.loavesfishes.org/, are appreciated.