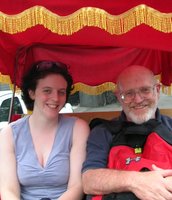 Richard James McGovern, a beloved father and husband, passed away on April 23rd, 2021 in Portland, OR, in the presence of his wife, Alice McGovern. He was 73 years old and died after a long battle with cancer and the aftereffects of radiation treatment. Richard was born in Philadelphia, PA and raised in Bellmawr, NJ. He holds a bachelor’s degree in mathematics from Fordham University. At Fordham, Richard met Alice Moran, a classics student from Brooklyn, NY. They married on December 27th, 1969 in the middle of a blizzard. They then moved to Philadelphia, where Richard earned his doctorate in mathematics from the University of Pennsylvania with the thesis “Quasi-free Derivations on the Canonical Anticommutation Relation Algebra,” later published in the Journal of Functional Analysis. When he was not studying mathematics, Richard was an enthusiastic rugby player. Richard and Alice followed Richard’s career as a mathematics professor to the University of Kansas in Lawrence, and then the Florida Institute of Technology in Melbourne, where they witnessed the launch of the first space shuttle. They finally settled in Rhinebeck, NY, in 1981, where Richard taught at Bard College and the State University of New York at New Paltz. In 1985 they welcomed a daughter, Margaret, and in the same year Richard was hired at Marist College, where he taught for the next 32 years. He was valued by the college for his ability to teach a wide variety of courses. His students knew him as a skilled and patient teacher who could explain the most difficult topics clearly. He particularly enjoyed preparing students for the Putnam Exam, a prestigious undergraduate competition in which the Marist students often did very well. In his leisure time he enjoyed swimming, windsurfing, playing pool, and practicing the martial arts of Tai Chi Chuan and I Liq Chuan. Richard is survived by his wife Alice (Moran) McGovern, his daughter Margaret (McGovern) Berry, her husband Alex Berry, and his granddaughter Alice Berry. He also leaves brother Stephen McGovern, brother Mark McGovern and wife Linda, brother Michael McGovern and wife Linda, and their seven children and eleven grandchildren. Because of the COVID pandemic, there will be no in-person service for Richard, so there is no need to send flowers. Should anyone wish to, they are invited to make a donation to St. Joseph's Prep. At St. Joe's, Rich received the fine education that started him on the path to the career that he loved: being a mathematician and teacher. To donate by mail: St. Joseph's Preparatory School, 1733 W. Girard Avenue, Philadelphia, PA 19130 To donate online: www.sjprep.org/support