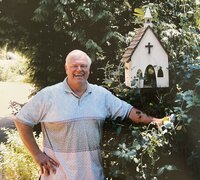 Peter Gabriel Bourlin Obituary Many legends have been born to this Earth. Peter Gabriel Bourlin was among them. Peter was born on October 24, 1946 in Nanking, China, then God broke the mold. When he was suddenly yet peacefully taken home on August 15, 2021, heaven rejoiced, then Peter put on his dancing shoes and invited all the souls there to join him in celebration. He was finally where he wanted to be. His life story was one of the novels he loved to read, filled with global travel, culture, heroism, drama, brilliance, immense love, and laughter. God was constantly at the helm of his adventures throughout life, as Peter, a devout Christian, had an unwavering love for and loyalty to his Heavenly Father and Jesus Christ. “Be wholly committed to being Holy,” he’d say, ever the wordsmith. Peter’s strength and confidence made all who surrounded him stand a little straighter, lift their heads higher, and smile broadly. He radiated love and his very being was influential. His boundless wit and wisdom energized and brightened the days of everyone he encountered. His generosity was boundless, and he dedicated his time to enriching others’ lives however he could. He embraced life wholeheartedly, with vigor, and contagious laughter. His kindness rivaled his strength. His heart could encompass the world. His love of life was limitless. Born stateless of Russian immigrants, Peter, his mother Ludmilla, father Gabriel, and sister Olympia moved to Brazil where young Peter ignited a lifelong passion for soccer. Already fluent in the Russian language, he quickly adopted Portuguese into his linguistic repertoire. The Bourlin family immigrated to the U.S. in the late ‘50s, settling in Oahu, Hawaii where Peter attended Kalani High School, skipping two grades, and graduating early despite his recent acquisition of the English language. When his father passed away at age 45, Peter became the sole supporter of his mother and sister, working at United Airlines in Honolulu and serving in the National Guard while putting himself through college. In Hawaii, his love and respect for the ocean drew him to bodysurfing, spearfishing, and diving. Once he even fended off a shark. In water, he found tranquility and solace. In all nature, until the end of his days, he found tremendous beauty and peace. In his ever-present thirst for education, he graduated from the University of Hawaii and then University of California, Berkeley, where he studied and excelled at political science and finance. He had one daughter, Natasha, who he doted on, played with, kept motivated, and instilled with wisdom and love. She adored her father beyond words; he was her hero. God-loving, handsome, charming, and brilliant, Peter could walk into a room, fill it with his magnetic, gargantuan personality and smile, and depart with a multitude of new friends. Gazing at them intently through his electric blue eyes, he had a way of making everyone he encountered feel special, loved, and invigorated. Lovingkindness was his favorite word. He was rainbows and sunlight, thunder and lightning, a refreshing rain that washed away any sadness or negativity with a joke or bear hug. Those he loved were among the luckiest people in the world, blessed with his caring eyes, concerned ears, and shared wisdom when needed. Sometimes when it wasn’t. He was an avid chess player throughout life. He loved reading, writing, boxing, karate, and became savvy at the stock market. A voracious reader, Peter’s library was vast and his quest for knowledge unsatiable. He read the Bible cover to cover annually, while also keeping a tower of books within reach to ensure his mind remained sharp, and his edification on myriad topics ongoing. Peter’s daring and bravery was unparalleled and inspiring. While working with United, Peter received heroism awards for saving planes from fire two separate times and saving countless lives. For many years during the holidays, he would dress up like Santa for terminally ill children and perform the role to perfection. In Portland, he became an advocate for fellow immigrants, using his fluency in Russian to assist Russian and Ukrainian migrants with American matters new to them such as business and banking. Upon leaving Oahu, Peter lived in Las Vegas, Reno, Newark, Phoenix, and the Bay Area, eventually settling in Portland, Ore. He also embraced and explored the world with fervor, visiting countless countries and states in his lifetime. Journeys to Israel, Portugal, and Tahiti were among his favorites. After retiring from United, he began volunteering with Nursing Home Ministries in Portland, earning the title of chaplain. He was inspired by those in hospice and rehabilitation facilities that he assisted and befriended, bringing light and peace to them, often in their last days. His genuine, gregarious nature gave him the ability to pull people out of their shells, and he mingled with many celebrities in his day, including Elvis Presley, Marlon Brando, and Alfred Hitchcock. Peter’s boisterous personality, humor, generosity, kindness, and warmth made him beloved to so many in his lifetime. He was a legendary father, brother, son, friend, chaplain, and son of God. “Your faith in Christ Jesus will get you to Heaven, but your works will determine how big a mansion you’ll live in,” Peter said. Peter Bourlin will live on forever in the hearts of those who knew him, and is survived by his daughter Natasha, sister Olympia, and nephew Kamin Matherne. A memorial service will be held at Forest Lawn Cemetery in Gresham, Ore. on Friday, October 22 at 11 a.m. In lieu of flowers, please donate to the St. Jude’s Children’s Research Hospital Peter Bourlin Memorial Fund.