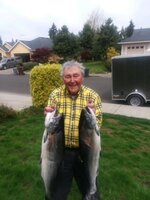 Joe Manser, 93, passed away peacefully at Mt. Hood Medical Center with his family at his side while recuperating from a fall in his home in Portland. Joe attended Holy Cross Grade School and Roosevelt High School with his older brother John and graduated in 1946. Joe became an Army paratrooper and was honorably discharged. He attended Vanport Community College then became a City of Portland Firefighter, becoming a lieutenant before retiring in 1985. He maintained lifelong friendships from his time in the Portland Fire Bureau. Joe married Lenora (Lennie) Jane Rickel and settled his family on the corner of Amherst and University Streets in North Portland. Joe and Lennie had three sons; Steve, Stan and John. Life was good for Joe and his family with all the wonderful neighbors there. Joe loved fishing almost as much as his family. He was happy that his youngest son John carries on his passion for fishing. Joe also liked to travel and play golf. After they retired, Joe and Lennie spent winters in Arizona and summers in Portland. Lennie passed away in 2002. While at Leo Maguigans Northenders reunion in 2007, Joe reconnected with a woman he had known in high school. He and Virgeen Piltz spent the next 13 years together traveling and golfing. Joe’s love of life was amazing. Joe is survived by his son Steve and his wife Gail and their family, his son Stan and his wife Kelley and their family, and his son John and his wife Diane and their family, niece Paula Hoobing and her husband Eric and their family, and extended family in Oregon, Washington and Idaho. We loved him very much. Arrangements by Wilhelm’s Portland Memorial. A committal service with military honors will be announced at a later date.