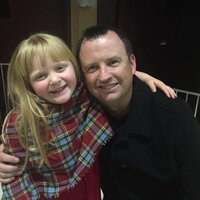 It is with profound sadness that we announce the passing of Michael Wayne Bakke. He died on May 2, 2022. Born in Portland on March 28, 1974 to Sharon Bakke (deceased) and Glenn McGuirk, Mike was adopted by his grandparents Pearl and Kermit Bakke when he was about six years old. He lived his entire life in East Portland, having graduated from Marshall High School in 1992. There, he was a talented football and baseball player, with no lack of friends and swagger. In 2002, Mike married Sarah (Snyder) Bakke, and in 2010 they adopted Kathleen (Katie) Rose Bakke, the light of Mike’s life. Sarah and Mike later divorced in 2018. The vast majority of Mike’s professional life—23 years—was spent working for Stack Metallurgical Services, a metal processing provider, as a Maintenance Technician. He was also a lifelong fan of the University of Oregon and its sports teams (especially football—Go Ducks!), the Dallas Cowboys and Portland Trailblazers. For him, nothing beat taking Katie Rose to Annie's Donuts and Blazers games, camping at Pine Hollow, fishing at Lawrence Lake and, of course, attending Autzen Stadium for his beloved Duck games. Mike also participated in several Hood to Coast Relays. Mike had many fond childhood memories after he was adopted by his grandparents. Hijinks with friends, playing and watching sports, sleepovers, but regrettably, early childhood trauma contributed to lifelong challenges for Mike. These trials contributed to the alcohol dependency that caused his untimely death. Mike is survived by his daughter Katie Rose, ex-wife Sarah, father Glenn and brothers Robin McGuirk, Dustin McGuirk, Sean McGuirk, Evan McGuirk and Gary Helgeson. A celebration of Mike’s life and memorial will be scheduled sometime in the Summer 2022.