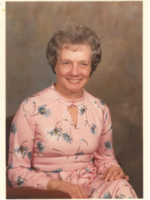 Loraine Anna (Diers) Thoms, 99, of Portland, Oregon, passed away peacefully at MorningStar Memory Care in Happy Valley on the morning of May 12, 2022. Loraine was born January 2, 1923 in Leonardsville Township, Minnesota. She was the daughter of William Frederich Diers and Clara (Vogt) Diers. Loraine was the third child, and their only daughter. Her brothers were Otto (1913-1978), Martin (1914-1945), and Leroy (1913-2015). Loraine grew up on the family farm about 10 miles from both Graceville and Chokio, Minnesota. She attended a one room school about a mile from the farm and graduated from high school there. Loraine was baptized and confirmed at St. Paul Lutheran Church in Chokio, where she taught Sunday School and was the Sunday School Superintendent. Loraine moved to Oregon in 1948 and married Clarence Thoms on May 1, 1948 at St. Paul Lutheran Church in Portland, by Pastor Batterman. Loraine and Clarence lived in Milwaukie, Oregon. They were married for nearly 50 years and were blessed with three living children: Carol, Keith and Bruce. The home in Milwaukie was where they lived and raised their family. St. Paul Lutheran Church in Portland remained Loraine’s church home throughout her life. She regularly attended services and bible study, was a member of Lydia Circle and volunteered her time helping in administrative financial duties for over a dozen years. Loraine devoted her life to her home and caring for those she loved. Later in life, as she lived alone, she relished the freedom her own home and the pleasure her flower gardening brought. She took pride and delight in her grandchildren and their joyfulness brought her many smiles. Sitting on her deck in the heat of the sun brought her much comfort. She did enjoy traveling, with a cruise through the Panama Canal being a highlight. A two-week trip to Branson, Missouri brought many memories. Twenty-two shows was her heart’s desire, and she loved each and every one of them! She volunteered time as a poll worker in the time prior to mail in voting. She loved good food, family and friends. Loraine joined the workforce again later in life, driving a food service route- where she enjoyed the camaraderie of her customers. She later worked at and retired in 1988 from Tektronix. Loraine enjoyed over 30 years of retirement, living in the same home in Portland. Her final year was at the MorningStar Senior Living in Happy Valley. In her later years of life her favorite television was Johnny Cash and game shows- especially those from the 1970s. Loraine is survived by her daughter, Carol of Halliday, North Dakota; and four grandchildren: Randy, Dustin, Amber and Gregory. Neices and nephews: Allen, Curtis, Jill, Joan, Dean and Carter. Her parents, William Diers and Clara (Vogt) Diers as well as her daughter Sandra and sons, Keith and Bruce preceded her in death. Brothers Martin, Otto and Leroy have also passed, as well as nephew David. Her final resting place here on earth is Wilhelm Portland memorial Funeral Home and Mausoleum, where both Keith and Bruce as well as Otto and Helen’s crypts can be found nearby.