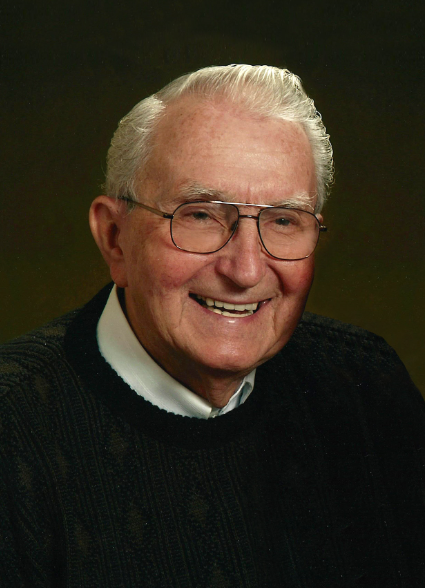 Jack Joseph Schlechter passed away peacefully, at the age of 90, on December 7th, 2018 surrounded by family.

Jack, the youngest of three children, was born on July 6th,1928 to Anton and Hermina Schlechter in Portland, Oregon. When he was young, his family owned a soda fountain/ice cream parlor. The family lived over the parlor and they would go downstairs to make ice cream floats after the customers had left and before bedtime. The family also owned a ski boot making business. After he graduated from Benson Polytechnic High School, he served in the U.S. Army for two years as a Field Lineman in Mason, Korea. Jack then earned his Bachelor of Science degree in Electrical Engineering from Oregon State University.

He married Charlene Lair in 1950. They welcomed ten children into their home in Southeast Portland and raised them together. He worked as a salesman for 30 years for, and retired from Graybar Electrical Supply, winning many awards, such as trips to Tahiti and the Bahamas, along the way.

Jack and Charlene enjoyed nights out while in a bowling league. They often went out for a “bowl of soup” on other date nights out together. Jack built a house in the country near Oregon City for his growing family with the help of his children. He loved to entertain and welcomed whoever came by for a swim. He was famous for his barbecued chicken and always had the keg full and chilled.

Jack volunteered his time and talent to the Catholic churches he attended and to his children’s schools. He was known to lend a hand to whoever needed him. He was an active member of the Knights of Columbus, the Holy Name Society, and served as the president of the Sacred Heart Parish Council.

Several years after Charlene’s death, Jack married Rose Moore. They enjoyed their retirement years together. Jack loved the Oregon coast and their many trips there as well as traveling the nation and beyond. They enjoyed visiting family and friends and always had a plate of cookies, coffee, and tea ready to serve guests who came to visit.

Jack loved his family and family gatherings. He celebrated his 90th birthday in great style with his extended family this last summer. He will be greatly missed by all who knew him.

He was preceded in death by his parents, Anton and Hermina, his wives, Charlene and Rose, and his sisters, Katherine Stark and Hermina (Minnie) Harlow. Jack is survived by his children: Jan (Dave), Jack Jr., Jim, Jill, Jeff (Shirley), Jerry (Heather), Joe (Sharon), Jeanne, Julie, and Joanie (Carlos), his 19 grandchildren, and 12 great-grandchildren.

A Recitation of the Rosary will be held at 1:30 p.m. with a Mass of Christian burial following at 2:00 p.m. on Wednesday, December 19, 2018, at Sacred Heart Catholic Church at 3910 SE 11th Ave, Portland, OR 97202. Father Bob Barricks will be the officiant. A reception will be held immediately following the Mass. In lieu of flowers, donations can be made to Sacred Heart Parish.