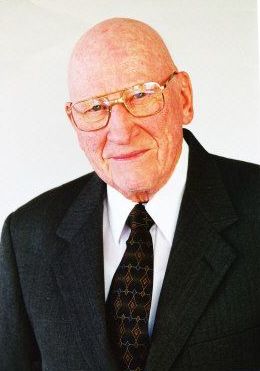 Dr. Rev. Earl W. Riddle was born and raised in St. Joseph, MO, and graduated from the University of Kansas and Boston University School of Theology, later earning a Doctorate of Ministry from San Francisco Theological Seminary.  His wife, Etta Kathryn (Kitty), whom he met in Jr. High School, was also a graduate of the University of Kansas with a degree in Music Education.  Earl served as a Navy Chaplain towards the end of World War II & then returned to Boston University for four more years of graduate studies.

In 1950, the Riddles moved to Oregon where Earl was Campus Minister at Oregon State University while Kitty taught piano.  He then served as pastor of the United Methodist Church in Forest Grove, OR, Twin Falls & Caldwell, ID before being appointed as Program Executive for the Oregon and Idaho United Methodist Church Conference in 1968.  He retired in 1985.  Earl was a member of the ethics Institutional Review Board at Oregon Health and Sciences University for 42 years.

In 1999, Earl and Kitty moved to Willamette View retirement community where they were both active in leadership roles.  Kitty passed away on Christmas Eve, 2011.

A service of memory and celebration of his life will be held at First United Methodist Church, Portland, on January 26, 2019, at 1:00 PM.

Donations may be made in Earl Riddle’s name to First United Methodist Church:  fumcpdx.org or to Blue Heron Foundation at Willamette View: BlueHeronFoundationWillametteView.org.