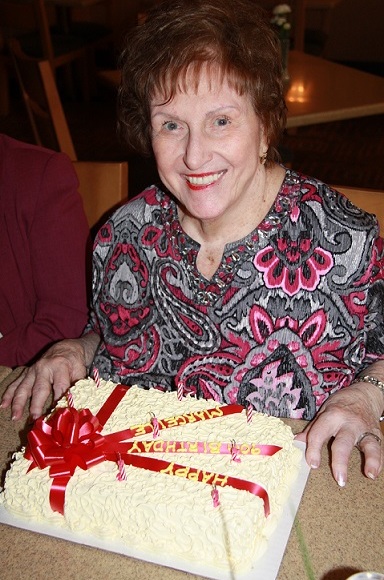 Marcelle Addington age 94 of Milwaukie, OR. passed away on Sunday, December 30, 2018. She was born to the late George Edward Winzenried & Maymee (Gibson) Winzenried on October 14, 1924. She is predeceased by her parents, her husband Edgar (Ace) Addington in 1999, and her sister Sarah (Sally) McClain in 2013.

Marcelle attended Wichita School on King Street, Milwaukie Junior and then she graduated in 1942 at the age of 17 from Milwaukie Union High School. Her employment history started at the age of 17 just freshly graduated she was hired as a teletype operator for Western Union. She was very quick and accurate. She was promoted by Western Union to go to San Francisco during the war to type Russian code, but in order for her to be able to accept the job in San Francisco she needed to be at least 18 years old. When Western Union realized she was not 18 they told her that she could not go to San Francisco that she needed to wait. Marcelle being very determined and independent said “ but I have planned on taking the job and I really want to go” …… so she went. Marcelle immediately went to San Francisco and showed up at the workplace and told the manager she had transferred here and was ready to start work now. They showed her to a desk and her age did not come up again. She turned 18 six months later.

She worked in San Francisco for one year and then she moved back to Milwaukie. Her employment from then on was in the Portland /Milwaukie area and she was employed with Metropolitan Life, Wagner/ Edison McGraw and State Mutual. She worked until she was 81 years old.

Marcelle was the happiest when she was with family and friends. Family and friends were her passion and delight. She was thrilled to attend the Red Hat Ladies functions, numerous church gatherings, birthday parties, reunions and she attended church regularly. She was delighted when people dropped in to see her or they picked her up and took her on a new adventure. She loved going out for a meal or being invited to share a holiday meal with friends.

She loved her flower garden and her home on 35th Ave. which Marcelle and her husband Ace moved into in 1950.

She loved baking…. the sweeter the better, she enjoyed playing cards and games, listening to music, she also enjoyed listening to the “talking books” when her eye sight began to fail.

She had the ability to tell a story and make us want to hear the story over and over again. Her storytelling wasn't about making things up.

She was honest, real and sincere telling her stories and most often they were about herself. She was playful and brilliant by adding humour in her storytelling which was another delight. She could definitely laugh about herself.

We all loved her masterful skill of telling stories also her memory of detail for the stories. In 2017 as we were helping her move to Brookdale we were talking about something that happened in1958 and she shared in great detail the color of the dress she wore, what her shoes looked like and even the color of the flower she wore in her hair, who she met and what they did on that day. Of course, the dress, the flower in her hair, the purse and shoes were red. … shiny red.

Finally, and perhaps the key to her happiness, was the side of her that had a whimsical approach to life. She loved to laugh and have a little more fun or a new adventure. It must be said that her appreciation for the color red, 94 clocks (one for each birthday), hearts, little deer, her love of red and yellow flowers, leaving the lights on 24/7, and the love of music and hummingbirds brings the word whimsical to life and reflects the child who still lived and breathed within Marcelle. To her last day, she was always able to smile and even more able to laugh at herself in ways which had so many of us laughing in stitches so much of the time we were around her.

In 2017 she moved from her home of 67 years to Brookdale, Sellwood. When she was diagnosed with cancer in December 2018, she had another move to Infinite Care in Clackamas. Marcelle demonstrated great courage the last days of her life passed away in the early morning on Sunday December 30,2018.

Marcelle your life was a blessing, your memory a treasure, you are loved beyond words and missed beyond measure.

A memorial service, celebration of life, and small reception will be held on Saturday, January 12th at 1pm at Wilhelm's Portland Memorial Chapel. In lieu of flowers please donate to the American Foundation for the Blind either at https://www.afb.org/default.aspx or mail a check to: