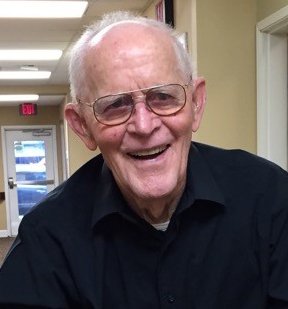 Bud Brownlow was the second of 11 children born to Frank and Myrtle Brownlow of Hay Springs, Nebraska. Having been raised on a farm, when he was a young man Bud went to work as a horseman at Ft. Robinson. He was drafted into World War II and served four years in the South Pacific.

He returned to Chadron Nebraska with a young family and lived there until 1955 when he brought his family to Portland Oregon. There he secured work as an automatic transmission specialist. He continued in that profession his entire working career.

Bud was initially married to Frances Schommer and later to Geraldine Meyers. He was a dedicated patriot and spent hours volunteering for the VFW and the Portland Americanization Council.

He is survived by four sisters, his four children, Carol Brownlow, Rene Custis, Leonard Brownlow and Leona Rennie and by stepsons Rick Meyers and David Meyers. He also has many grandchildren, great grandchildren, nieces and nephews. He had a special relationship with his grandson, Bryan Meyers, and often said how much he loved his family. His hobbies included gardening, golf and square dancing.